These are the stories behind the pictures I use for my banners: 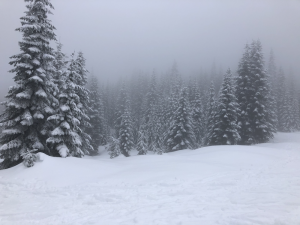 A scene from a recent snowshoe trip in the Cascades near Snoqualmie Pass 2021 (photo: L. McMurdie) 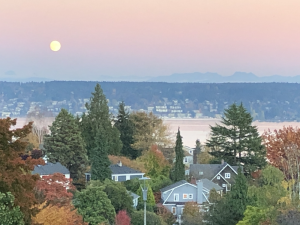 Moonrise over Lake Washington as viewed from NE Seattle on one of my walks in the neighborhood (photo: L. McMurdie) 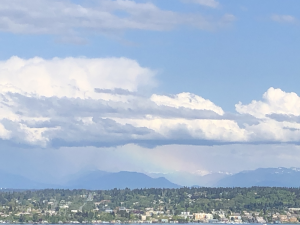 This is our WINNING WxChallenge team (at least those that made it to the photo shoot!) from 2019!! (Photo: Dennis Wise) 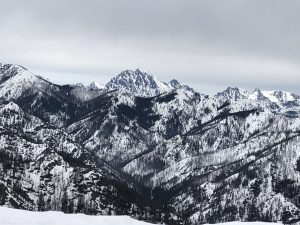 This is a picture of Mt. Stewart and surrounding peaks taken from a snowshoe trip off the Salmon La Sac Road in March 2019 (photo: L. McMurdie)

This is a panorama taken at Laurelhurst Park in February 2019 during a series of snowstorms that gave Seattle ~20″ of snowfall. There was ~8″ on the ground in this picture (photo: L. McMurdie) 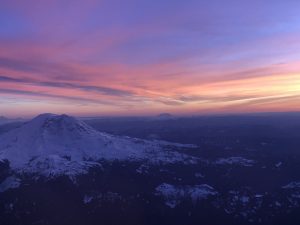 Photo taken when on the approach to SeaTac at sunset with Mt. Rainier and Mt. St. Helens in the foreground. I think that’s either Mt. Hood or Mt. Adams to the left behind Rainier. Photo taken January 12, 2019 (L. McMurdie) 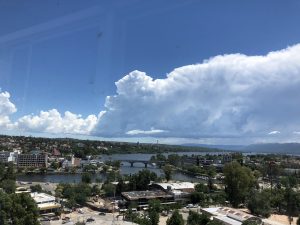 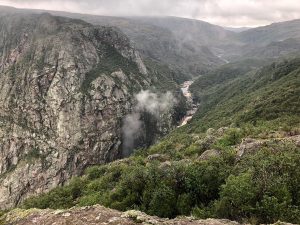 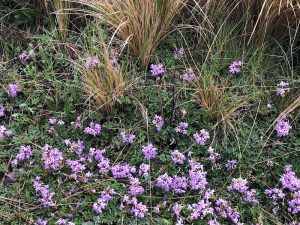 Some of the typical flora of the Sierras Pampeanas region we saw in the Quebrada del Condorito Parque Nacional de Argentina. Photo taken 7 November 2018 (L. McMurdie). 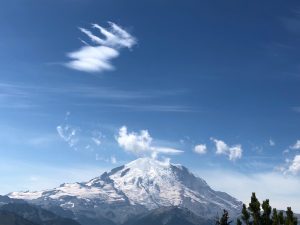 This is a picture of Mt. Rainier taken from Crystal Peak to its east. There are interesting lenticular clouds (one small one on the top of Mt. Rainier and one in upper left) and small cumulus clouds forming due to heating of the lower hills in the foreground. Picture taken August 2018 (photo by L. McMurdie). 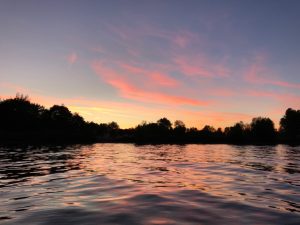 This is a sunset picture taken while kayaking on Lake Washington in August 2018. Nice cirrus clouds. (Photo by L. McMurdie)

This was taken in near Ligano, Italy on 8 July 2018 after an intense thunderstorm that produced sideways rain and 10mm hail. Other thunderstorms (or this one) destroyed over 1/2 the grape crop in the Trieste region. (photo by L. McMurdie) 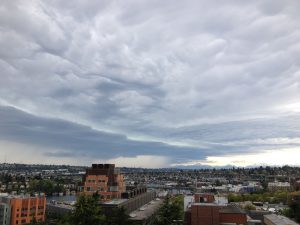 This was taken from the roof of the atmospheric sciences building looking west on the afternoon of 4 May 2017 when we had a rare day with dewpoints in the upper 60s, southerly upper-level flow and a series of intense thunderstorms. I think it was the only time that the NWS issued multiple severe storm warnings in western Washington. (photo L. McMurdie, I was trying to get a lightning shot… sadly I never captured any bolts) 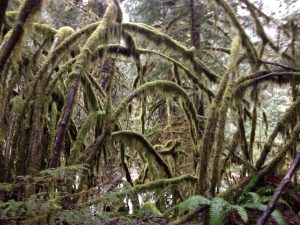 This is a picture of moss/lichen covered trees/branches mostly like of several Black Maple trees (maybe??) taken from a trail on the Nooksack river in February 2018. (Photo L. McMurdie, on yet another trip with Pascale).

This is another shot taken before the storm hit us near Ligano, Italy July 2018. (Photo L. McMurdie). 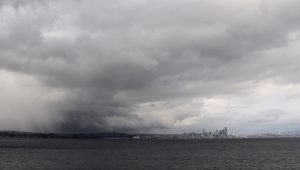 This is photo of downtown Seattle most likely taken from a Ferry in the spring time when a pretty good storm (Puget Sound Convergence Zone?) is hitting to the north of town. I don’t know where I got this shot (maybe I took it? maybe not?). 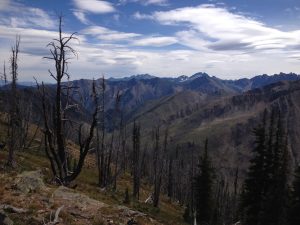 This is taken from a hike outside of Mazama, WA looking west on August 28, 2016, the day after my son’s wedding. Lenticular clouds were forming as moisture was advecting in from the west from an approaching weak upper level short wave. The trees in the foreground are what remains after a major fire in the region a couple years earlier. (Photo: L. McMurdie) 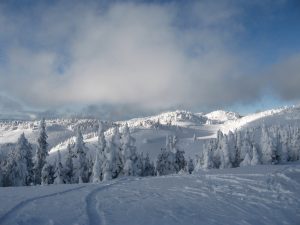 This is taken at the top of SunPeaks ski area near Kamloops, BC way back on 31 December 2007 after a good dump of snow. The trees at the top get wonderfully rimed and look like gnomes. (Photo: L. McMurdie)