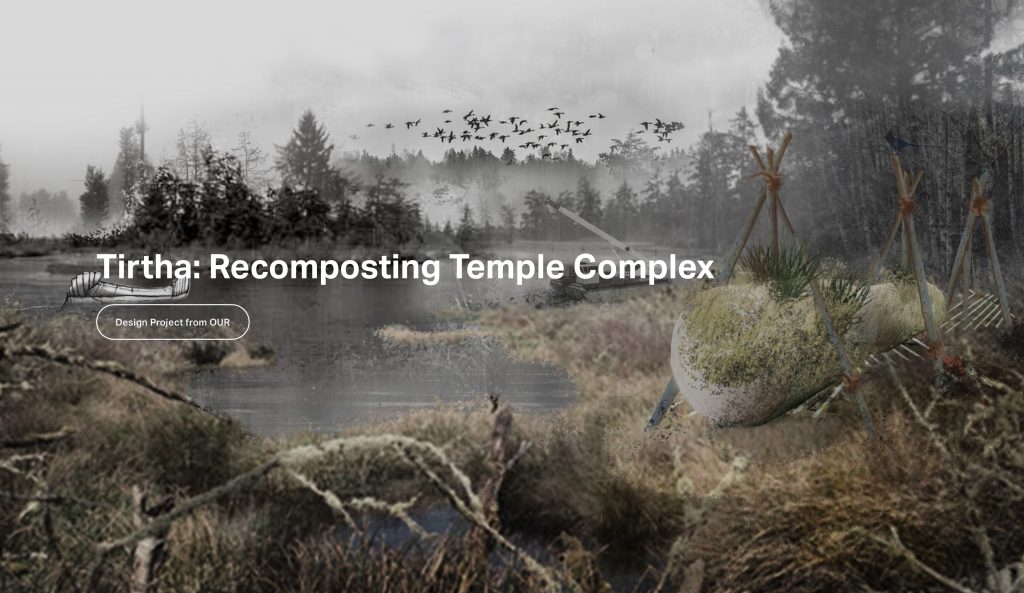 This Recomposting Temple Complex is where human bodies can not only be composted, but also where bodies can be ceremonially received, prepared, and honorifically “sent off” to the recomposting islands just off-shore from the temple. The originating conceit of the project is that while the science of human body recomposting is well developed, we don’t yet have a cognizant and matching 21st century social epistemology for recomposting, that can be celebrated with an appropriate honorific ritual practice, which of course needs to be staged upon a suitably rich, ritual architecture. OUR project aspires to do just that, joining the work of others in this field.

The basic epistemic conceit of the project is “….something becomes something else….”. The laws of physics suggest, indeed require, that everything in the universe, ‘dead’ or ‘alive’ is made of the same sub-atomic particles and forces and is subject to all the same laws, without exception. This suggests therefore that birth and death, while indisputably significant ‘events’ in this complex sub-atomic particle configuration we call life, are in fact little more, and nothing less, than reconfigurations of sub-atomic particles and forces, a process that is enacted in the universe in a myriad different ways, everywhere. Life on planet earth is no doubt a very special event; even so, it is part of the infinite diversity of particularly re-configuration – “…something becomes something else…” again and again, that is fundamental to the processes of the universe.

Tirtha is a Sanskrit word that means “crossing place, ford.” In India, there are dozens of these places, some of which have become pilgrimage sites. In this project the temple is at the core of the tirtha, but ‘the crossing’ is a drawn-out spatial and temporal process that encompasses the whole site and its program. In that sense the tirtha is embedded in a type of ‘temenos’ or sacred area, the intensity of which is thickened over time and use.