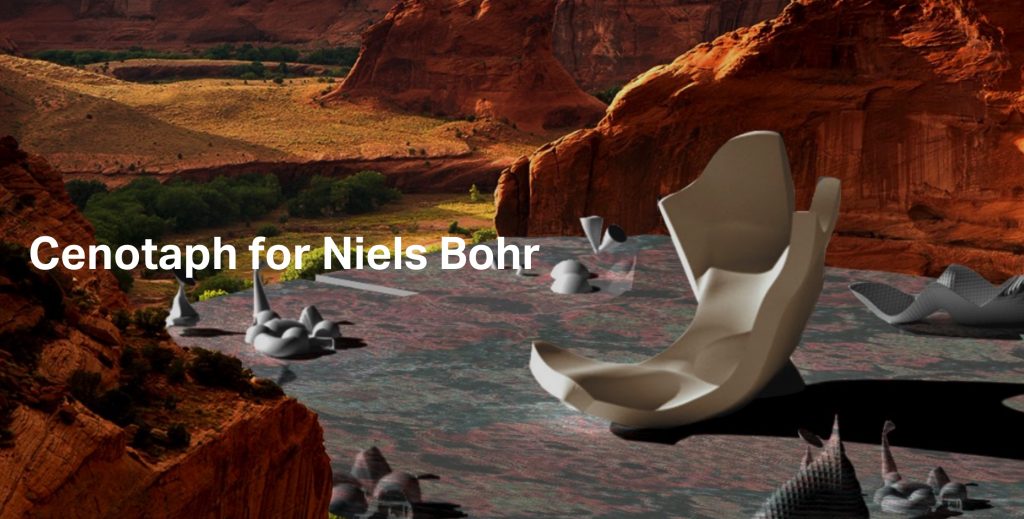 The Cenotaph for Niels Bohr builds on the tradition of previous cenotaph’s for Isaac Newton by Jean Étienne-Louis Boullée (1784) and for Albert Einstein by Lebbeus Woods (2009). As cenotaphs, these are not memorials, but dedicatory objects that aspire to give conceptual form to larger ideas embodied in part by the people they enshrine. If  Boullée’s cenotaph for Newton embodied the ideals of Enlightenment classicism, and Woods’ Einstein cenotaph meditated on the mysteries of the speed of light, our cenotaph for Bohr enshrines the uncertainty/probability/indeterminacy that is at the heart of quantum mechanics as one of the founding ‘mysteries’ of life. OUR Cenotaph for Niels Bohr situates the mystery of Bohr’s probabilistic universe, and its highly unlikely and fragile gift of life on earth, in an onto-epistemic dialogue.

The project has three components: The first consists of a [1/n:space] a Satellite orbiting one of the outer planets, preferably Saturn and [1/n: earth] a Receiving Station. The second consists of the Neutrino Detection Chamber  and a corresponding plaque on the floor of the Indian Ocean. The third is the platform/mandapa which contains the housing for the scientists, extra listening equipment (real of fictional), and performance spaces.