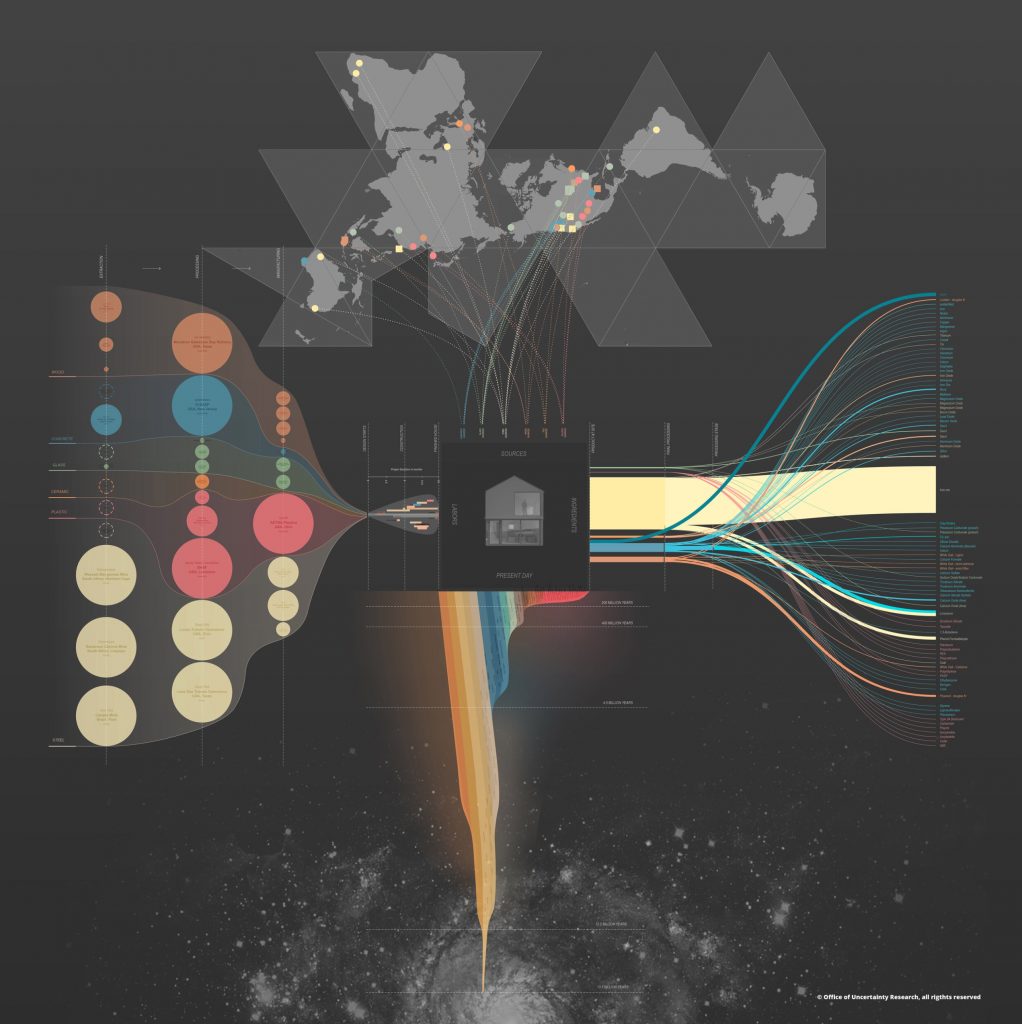 What is the backstory of this house completed in 2018? Most architects might think they know to the answers, but in truth, they are just as ignorant as the general population. This Structural Silence pervades the entire profession and is even fundamental in schools of architecture, where despite a lot of talk about Sustainability, pedagogy refuses to critique the Construction Industry or even to understand the fundamentals of this history and its relationship to neo-liberal capitalism.

Architecture today is addicted to four basic products: steel, concrete, glass, and plastic. Each is a figure in the hyper-industrial world in which we live. We are living in the golden age of the Quadrivium Industrial Complex. Though imagined as elements of modernity, it was only with the neo-liberal economy with the 1990s and the consolidation of the construction industries that these materials could be normalized. The result: never in human history has mining, production, delivery and assembly – the basic activities of the Quadrivium Industrial Complex – been more extensive and cheaper. Yet this golden age will not last forever. What is its future?

A house is like a Black Hole. It sucks a huge amount of energy, creativity, materials, labor and molecules into its orbit. But in the end what does the house tell us about all of that. Nothing.

PHOTOSYNTHETIC SURFACE OF THE EARTH: This is source of the various woods that were used in the house.
(0 – 150 years)

GEOLOGY: This is source of various compounds created through heat and compression: like magnesium ore, silicone, and oil. Glass, rubber and concrete are all fabricated in this time-space continuum.
(0- 4.5 billion years)

Even a small building like this places a huge amount of human bodies into motion. The composition and embodied energy of the house is as much its material as it is its labor. Behind every material there are several processes. And behind every process, there are bodies. Labor. Workers. Legal. Illegal.

Here, we show that the work undertaken to build a house consists of much more than just the architect sitting behind their desk at an office and the construction workers at the site. Labor begins much before the architect draws the first line – it begins with the extraction of the raw materials used to manufacture the products that will eventually create the house. The harvesting of timber, the mining of aggregate, the drilling of oil, the extraction of sand. After the extraction of raw materials, the complexity of labor practices multiplies amongst the transportation and manufacturing processes required to transform raw earthen ingredients into the finished product to be used in the building.

Materials for this house were mined from all over the world. In some cases we were able to get specific information, but tracing all the sources is impossible, so we used our best guess. There are two frames in this map: Extraction and Processing. Processing and finishing took place in Europe, Asia, Australia and the US. In some situations these Extraction and Processing are quite close. In others, they are far apart and have nothing connecting them apart from the global transportation network.

The ingredient list for a building is formidable. It contains elements that can be almost immediately transmutationed into building components, like wood or silicon. It also contains some of the most toxic chemicals on the planet, as well as chemicals that are at the apex of the industrial production system, especially those involved in the making of plastic. On the left-hand side of the graph we list the conventional designations: Wood , Concrete, Plastic, Steel etc.. How an ingredient gets from being a chemical -as listed on the right hand side – to become a dull semiotic is a large part of the magic on the construction industry (for better and worse). A ton of “concrete” is more than just sand, gravel and mortar, but also has a host of additives, most of which are unknown to anyone but specialists in the field. Additives – which have become increasingly numerous in the last twenty years – have extended the reach of building materials into the vastness of global, capitalist geography through sourcing and production.