In a nutshell: My research interests focus on providing clean, sustainable water for people and ecosystems. In more detail…

The Chemicals We Discharge to Water

My research group focuses upon understanding the fate and transport of organic chemicals in aquatic environments. I especially like to work on understanding and fixing  systems where chemicals are adversely affecting the health of fish or other aquatic organisms.

Surface waters, ground waters, and even drinking water contains low concentrations of thousands of  chemicals that humans have discharged to the environment. Unfortunately, the chemicals we use do not magically disappear when we are done with them, they will co-exist with us in our environment for days, months, years, and in some cases, even centuries. Did you know that many of the chemicals you used will not only outlive you, but also your grandchildren, and in some cases, your grandchildren’s grandchildren? True.

With growing recognition that these “contaminants of emerging concern” are both widespread in water and implicated in adverse effects on aquatic organisms, there is increasing motivation to understand their environmental fate and limit their discharge to the waters around us. Engineered systems were not designed to remove low concentrations of organic contaminants, so few of our existing control measures will efficiently control these chemicals. This implies that current engineered treatment systems need upgrading to more efficient technologies to control harmful trace organic contaminants.

So we are filling our waters with all of these chemicals. How can we tell which ones really adversely impact water quality? This is a really difficult question, the science is difficult, and we are still unsure which effects are really harmful to organisms.  The vast majority of these chemicals are safe, their concentrations are simply too low to have any effects. But a few of these chemicals really do matter, they are altering biological processes and inducing adverse effects in aquatic organisms and maybe even humans. In my view, identifying these “bad actor” chemicals in water is a critical and immediate generational challenge for environmental researchers. To solve this problem, we need to find ways to bring chemical and biological analyses together to detect those few toxic chemicals in water that we should really be concerned about. Once we know which chemicals really matter to environmental health, those ones that actually adversely impact water quality (i.e. the ones that kill organisms and reduce populations), we can then control their discharge and optimize engineered treatment systems for their removal. In my research group, we are working with advanced high resolution mass spectrometry analytical techniques, coupled with systems to study the environmental fate and treatment of these chemicals, to address this challenge.

Believe it or not, our urban stormwaters are still toxic enough to kill large fish quickly.  Here in the Seattle metro region, adult coho salmon returning to urban creeks to span in the fall actually die if it rains out.  This phenomena, called pre-spawn mortality, happens when storms mobilize pollutants in urban regions and wash them into surface waters, resulting in high concentrations of pollutant chemicals in the water. Coho seem to be so sensitive enough to some of these chemicals that they die, but we don’t know why. I am still in disbelief that we still have examples of repeatable, unexplained mortality in fish here in the United States.  In 2017!

In collaboration with researchers at NOAA-NMFS (Nat Scholz and others) and WSU-Puyallup (Jen McIntyre), my group is working to help understand and fix this problem.  We also are working with lots of citizen scientists to collect water and fish tissue samples; this has been lots of fun for our group! There are a lot of chemicals in urban stormwaters, so detecting a specific toxicant or set of toxicants is difficult.   We are using high resolution mass spectrometry to analyze water and tissue samples of coho that have died from pre-spawn mortality.  Through this effort and some realted studies, we are hoping to either actually find the toxicants, or understand where they are coming from.  We are also working with WaDOT and FHWA to better understand how we can treat highway runoff and build more effective options for attenuating chemicals in highway runoff.

Fate, and Transport of Steroid Hormones

All vertebrates (e.g. humans, cattle, fish, birds) produce and excrete endocrine active steroids that can enter receiving waters and affect aquatic organisms. These steroids include the endogenous steroids (naturally produced) as well as exogenous compounds (man-made synthetics) such as pharmaceuticals and anabolic growth promoters (e.g. trenbolone and melengestrol which are widely used in animal agriculture). In fact, most beef cattle in the U.S. are dosed with anabolic steroids to promote weight gain, and many other potent pharmaceuticals are used in industrial agriculture.

So why do environmental steroid hormones matter? Well, if you are a fish living in a receiving water with elevated concentrations of steroid hormones (or other endocrine disrupting compounds), you might find that your endocrine system has been “scrambled” a bit due to those contaminants. This is not a good outcome…  adverse effects include feminization of male fish, the masculinization of female fish, intersex gondal tissue, and 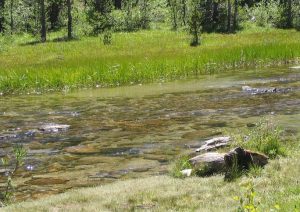 altered biochemistry and behavior. More importantly, endocrine active steroids can reduce fecundity, basically decreasing the number of viable eggs a female fish produces. These effects do not cause death or cancer, but instead alter the fitness, behavior, and most importantly, the reproductive potential of affected organisms.  Over generations, populations of aquatic organisms exposed to endocrine disruptors are potentially smaller than populations of unexposed organisms due to reproductive disruption.

Interestingly enough, this pattern of slow decline in population size despite no acute or chronic toxicity events is prevalent for many populations of aquatic organisms. Also, there are many studies using endocrine sensitive bioassays which demonstrate the widespread occurrence of endocrine activity in receiving waters, although the causative agents responsible for this endocrine activity are often unknown. Could sublethal effects associated with endocrine disrupting contaminants like environmental steroids, or their transformation products, be responsible for these declines? I want to know.

My interest in endocrine disruption focuses upon identifying sources of steroids and other potent endocrine disruptors, identifying their major transport and transformation pathways, and determining their degradation in natural and engineered environments. Once we understand the sources of these compounds and their fate in the environment, we can either stop using these compounds (or use a substitute) and optimize our engineered systems to remove them and protect ecosystem health.

Did you know that the vast majority of beef cattle raised in the United States are implanted with potent anabolic steroids to improve their weight gain? Where do these compounds go? Based on the existing literature, the fate of many agricultural pharmaceuticals in the environment is unclear, we are currently only accounting for a small fraction of the compounds used in animal agriculture. Although researchers do report associations between animal agriculture and unexplained endocrine activity in water, there really doesn’t seem to be a “smoking gun” contaminant responsible for these effects.

I would like to investigate this question by investigating the potential for structural conservation and retained bioactivity through environmental transformations across multiple endocrine endpoints. If our small subset of known endocrine disrupting steroids cannot account for observed endocrine activity, it may be possible that transformation products and other metabolites retain bioactivity and explain these observations. While our detection methods are extremely sensitive, they are also incredibly specific.  Thus it is possible that we simply cannot “see” many closely related structures that retain bioactivity and are present in contaminated environments.  This is an important question for many of the high-potency, potentially harmful  chemicals used by humans in various environmental systems.

Hopefully, attenuation processes will degrade these contaminants and reduce their bioactivity and appropriate management strategies will control their transport, but whether these strategies truly minimize the risk to aquatic organisms is unknown. I simply do not believe that we understand these systems well enough yet, and we may be overlooking important fate and transport outcomes.

The substantial body of research related to endocrine disruption has taught us one important lesson: Anthropogenic contaminants that interfere with biological signaling pathways related to reproduction are important. Nearly all research on endocrine disruption has focused on disruption of mechanisms related to nuclear steroid hormone receptors. This mechanism of action is based upon contaminants partitioning from the surrounding water into the bloodstream of affected organisms, entering cell nuclei, binding to nuclear steroid receptors, and altering “normal” endocrine function, resulting in effects such as intersex or disrupted reproductive potential. 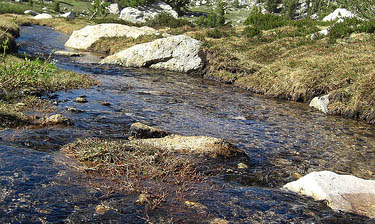 I’d be surprised is humans were not discharging various contaminants that also alter olfactory and pheromonal signaling pathways in fish.  If contaminants bind to olfactory receptors (no partitioning into the body or blood borne transport is necessary), secondary messenger signaling that acts to alter endocrine status in affected organisms may occur. For example, it is well known that progestin pheromones regulate gonadotropin hormone (GtH) levels in some species of fish during reproductive periods. The regulation of gonadotropin hormone, a potent hormone and regulator of endocrine status, results in substantial alterations to biochemistry and behavior in responsive fish. We know humans are discharging many progestin steroids or progestin-mimics (compounds that look like fish pheromones) along with many other olfactory-active compounds into receiving waters This implies that humans may be inadvertently disrupting biochemistry and behavior in sensitive species of fish through olfactory mechanisms, with potential adverse effects on fish reproduction similar to those observed through nuclear receptor mechanisms.

Potentially important olfactory disruptors include steroid hormones such as progestins, androstenedione, as well as compounds such as prostaglandins. Other contaminants such as metals and pesticides affect olfaction through physical damage of the olfactory bulb, removing the ability of affected organisms to respond to olfactory cues. As biologists and ecotoxicologists learn more about olfactory disruption and its effects, I expect that in some cases, efforts to insure the health of aquatic organisms would include an assessment of the potential for olfactory and pheromonal disruption in much the same way that the potential for endocrine disruption is assessed presently.

If you are interested in any of the above topics, I am always happy to have a conversation about the science and issues here, and maybe even what we need to do to figure these questions out.