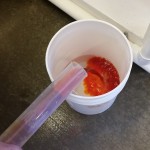 Our current research class project is to look at the restoration of Olympia oysters in Washington. On April 9, 2015, we went to the Puget Sound Restoration Fund hatchery site in Manchester where they are trying to restore the populations of our native Olympia oysters and other species including abalone and kelp. Their goal is to not only try to restore these native species, but also get the public informed and engaged.

What we were doing specifically that day was putting a fluorescent dye into the larval oysters to mark their shell when they came out of their mother. The next time we come, we will be able to see the growth of the shell and how much it has grown. We were told the dye will not harm the larval oysters. We will be looking at two different group of Olympia oysters, one group from South Sound and one group from Port Gamble. These are in separate groups as they have noticed one group growing larger shells than the other. 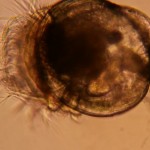 We fed algae that was grown by the hatchery to our oysters. After we fed the little shellfish, we were able to look at them through a microscope. Although we saw them moving, these little ones would not be able to swim against a current, so they can be an easy prey to many predators. The hatchery is a place for them to help restore their population, and we are in the beginning of a project to find out key locations where they can restored and hopefully be able to populate on their own.