With increasing wildfire burned area and severity throughout the western US, it occasionally feels like we live in a post-apocalyptic landscape. It is imperative that we restore “good” fire back to our wildlands and find a way to coexist with wildfire. Below I give an overview of why this is necessary. There are many resources to help us adapt to wildfire, which you can find at the following links.

Living with fire is an organization out of Nevada (and the director is a UW alum!) whose mission is to “provide recommendations to residents on preparing for wildfire and reducing wildfire threat to homes and communities.”

The Washington state DNR provides guidelines for being firewise, as does FEMA. See also this DNR web page with resources to help your community become fire ready. https://wildfireready.dnr.wa.gov/

When we contemplate recent wildfires, the are three questions that are often asked:

I don’t think these are the questions we should be asking.

Is this the new normal? What is normal?

The question of whether smoky summers and large wildfires will become our new normal misses two important points–what do we mean by “normal”, and new relative to what? Wildfire was historically “normal” in western US forests. Particularly in dry forests (think about the eastern side of the Cascade Mountain Range), healthy forest structure was maintained by frequent, low-intensity fire (with the occasional larger and higher severity fires). These regimes were maintained in large part by Indigenous land management practices that utilized fire for a variety of reasons (see here, here, and here, for example). Wildfire is therefore not new in the Western US, it just seems new to us because of a history of Euro-American colonization, erasure of indigenous cultural practices, and subsequent maladaptive land management. It was only during the 20th century that we imposed what seemed to be normal to us–a near century where wildfire was almost completely excluded from the landscape. What we have experienced in the late 20th and early 21st century is that old normal reasserting itself, but with a ferocity that is well outside of the bounds that occurred historically. 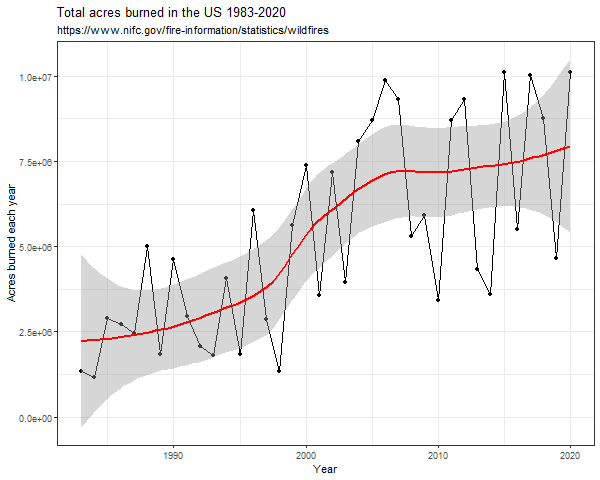 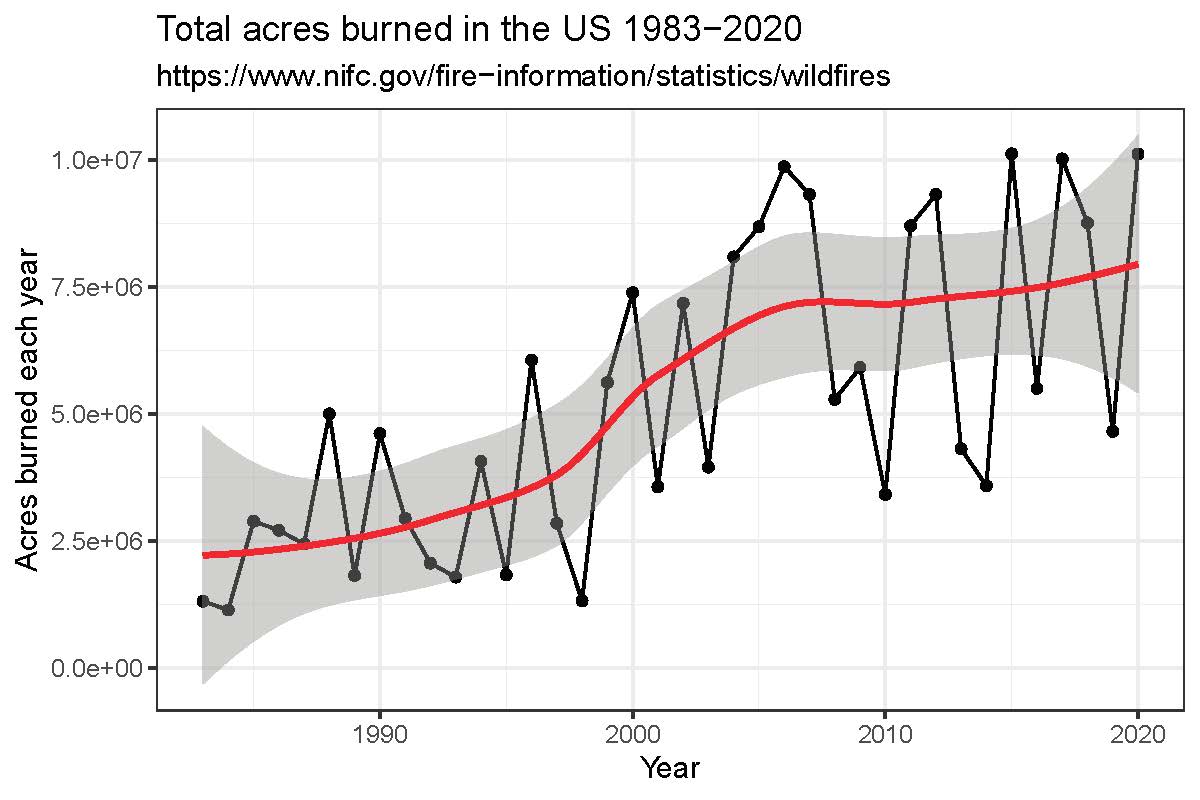 The debate between climate change and forest management as primary drivers of our current wildfires frames the situation in a false dichotomy and presupposes that it must be one or the other. Wildfire ecologists like to think in triangles. The fire behavior triangle consists of fuels (think of what you put into a campfire to burn, mainly dead vegetation including leaves, needles, twigs, branches, etc.), weather (how hot and dry it is, how strongly the wind is blowing, and in what direction), and topography (the terrain), all of which drive how a fire behaves–how quickly it burns through the landscape (its rate of spread), how hot are the flames (its intensity), how high do the flames reach into the canopy (the flame length), etc. An argument that forest management is to blame is focused on the fuels and ignoring the role of weather and climate. An argument that climate is to blame is ignoring the importance of fuels.

Dry forests in the western US have departed severely from their historical structures. These forests tend to be sufficiently hot and dry to burn every summer and historically the extent of burning was limited by the continuity of the fuels. The frequent fires that characterized their past fire regimes would clear out the small fuels (like kindling–the leaves, needles, twigs, and small branches) and small shrubs and trees, leaving lots of room for the larger fire-resistant trees to continue to grow. By excluding wildfire from these forests, we have allowed for the fuels to build up and become more continuous. Now not only is it hot and dry enough to burn, but the fuels are continuous enough to carry large wildfires with extreme behavior. Even without climate change we would be in a condition of high wildfire hazard due to this unnatural buildup of fuel.

Given the context of fuels, the story of an individual wildfire is told by the weather; climate change is undoubtedly exacerbating this wildfire hazard. Climate change is linked to increased frequency and severity of drought and heat waves across the western US. For a given fuel hazard, hotter and drier weather will worsen fire behavior. The most extreme wildfires can be expected under what are called “red flag warnings”–times of low humidity and strong winds. Prolonged drought primes fuels into tinderboxes that burn more intensely and dangerously. When considered in combination with the continuous fuels caused by past fire exclusion, we have the worse case scenario where wildfires are neither limited by fuel nor by climate.

What can be done to prevent wildfire? How can we coexist with wildfire?

It has become increasingly obvious that in vegetated systems wildfire is inevitable, and in many wildfire is necessary to maintain healthy ecosystem functioning. It is important to move away from asking what we can do to prevent wildfire and towards action that allows us to coexist with wildfire. There is a difference between “good” and “bad” wildfire. The headline-grabbing fires we have witnessed over the last several decades are examples of the latter–wildfires so far outside of their natural range of variability that they have catastrophic consequences for both the natural and the human dimensions. So how do we return to the kinds of fire that we can coexist with?

Low intensity surface fires can reduce the continuity of fuels and lessen wildfire behavior, limiting subsequent wildfire spread and severity. This can be accomplished using prescribed fire in mild weather conditions. Wildland fire use is another important tool, where wildfires are allowed to burn under the right conditions. Often, however, the fuel continuity is too great for fire alone to work. A large body of research has found that the best way to manage fuels and to restore resilient forest structures is a combination of mechanical thinning and prescribed fire. This requires going into the forest and using machines to remove the small trees, to create gaps, and to leave the largest fire-resistant trees on the landscape (note, this is different than timber harvest–the most effective mechanical fuel treatment leaves the most valuable trees alive and on the ground and removes trees that are not merchantable for timber). Prescribed fire can then be used to clear out the smaller fuels that remain after the thin. Time and again, even often under extreme weather, areas that have been thinned and burned have burned at lower severity than nearby untreated areas. These treatments do not stop wildfires from burning, but they do modify the behavior in a way that results in less catastrophic consequences, at least in the treated stands.

The best way to achieve a place where we can coexist with wildfire is to restore good wildfire to the landscape and create the conditions where wildfire takes care of itself. See the research section for some of the ongoing projects that have helped us understand how to accomplish this.