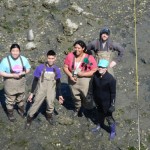 Our first field day was on May 7, the day that everyone was waiting for during the past six weeks. Our research group has been working hard, planning and preparing field gear for this day. Everyone was so excited. Finally, we were able to go to Fidalgo Bay to measure the Olympia oysters out in the mud.

The purpose of this field day was to measure size frequency of an Ostrea lurida population in Fidalgo Bay. Also, we were performing a relaxation of oysters to check for brooding. It would be a bad news if the oysters are brooding now, which is before we expected. This could indicate an unusual change in water temperature causing them to reproduce early. 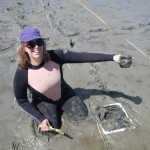 The fun begun when we started measuring near the trestle. I got stuck in the mud and had to crawl out on my knees. A couple minutes later, Brittany found herself got stuck in the mud. The more she tried to get out, the deeper she got stuck. She yelled “Umm… guys, I need help” when the mud was up to her thighs. Megan quickly came to dig around Brittany. Meanwhile, I came with a lid and a PVC stick to help pulling Brittany out. As I came closer, I saw Hannah fighting her way off the mud behind me. I instantly dropped down on the mud and started laughing so hard at the situation we were in. Fortunately, Megan was able to save Brittany after a good ten minutes digging for Brittany’s boot with her bare hands. We quickly accepted the fact that we have to crawl on our knees to get around in the mud.

During our size frequency measurements in random plots, almost half of our quadrats contained no oysters. The numbers of oysters with greater shell length of 15 mm were small due to small quadrats. However, we collected 148 oysters for brooder testing, which we also measured. They were then divided into two baskets. After letting the oysters sit in the Epsom salt solution for 45 minutes, 39 opened. Most of the oysters appeared to have no gray or white sic. A few appeared to have some gray matters, but were weren’t confident that we could distinguish the gray sic from mud. Therefore, we collected some samples to examine under a microscope for later. After brooder testing, we returned the oysters back to where we found them. 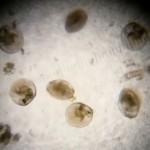 After a long field day at Fidalgo Bay, we have gained so much experience about teamwork and Olympia oysters. We became experts at spotting Olys and moving around in the mud. Also, realized that we need bigger quadrats to collect better data for next time. In addition, we examined the gray muddy things from the site under a microscope, and it was confirmed as gray sic. We observed tons of larvae swimming around under the microscope. This is big news and surprising for the Olympia oyster population. The warm weather this spring has caused them to reproduce before we expected them to. Besides that, we had a wonderful time at Fidalgo Bay learning about Olympia oysters. We can’t wait for the next field day.

(Editorial note: sorry for the delay in the posting of this blog. Things have really heated up at the Becker Lab! BJB)