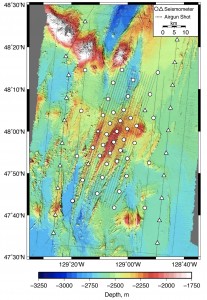 The Endeavour Tomography experiment (ETOMO) is a collaborative experiment involving the University of Oregon (Doug Toomey and Emilie Hooft) and my group at the Univerity of Washington that is funded by the National Science Foundation as part of the Ridge2000 program. After two delays due to ship availability issues, the data acquisition was completed using the R/V Marcus G. Langseth on a cruise that extended for August 22 – September 19, 2009. Prior to the cruise, several radial Canadian environmental groups cynically tried to stop the experiment through lawsuits and misinformation but they only succeeded in delaying it by one day.  You can read more about the environmental controversy here.  This page focuses on the exciting science.

My former graduate student Robert Weekly inverted abut 100,000 crustal travel times to obtain a model of the P-wave velocity structure of the Endeavour segment. One interesting finding is the large difference in velocities between the ends of the segment and its center.  This reflects enhanced fracturing and possible reduced hydrothermal ceiling in the crust that is produced in the large overlapping spreading centers that lie at either end of the segment. 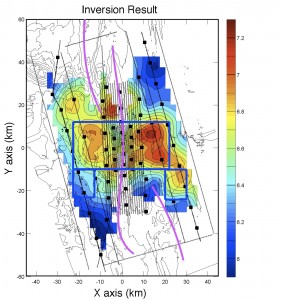 Graduate Student Dax Soule is currently inverting Moho reflections for variations in crustal thickness off axis.  The results show that the central Endeavour is underlain by a region of thickened crust that coincides with an elevated bathymetric plateau.  An IRIS Summer Undergraduate Intern, Ryley Hill, recently initiated an effort to extend these inversions to include ridge crossing Moho reflections