My research agenda lies at the intersection of the fields of political science and socio-legal studies. I examine rights mobilization, international courts and global justice institutions with a geographic expertise in Europe. At the heart of this research agenda is a concern for transparency, accountability and accessibility in legal institutions and governance and a dedication to analyzing real world social justice problems. My research is characterized by a theoretical concern for processes of legal and social change and an empirical focus on the role of courts and mobilized non-state actors (non-governmental organizations, interest groups, civil society) in this dynamic. This research examines not only a diversity of salient legal domains from the environment to sex discrimination and immigrant rights, but also emphasizes the inequalities in access and rights protection that arise due to gender, ethnicity, and class.

Note: Database update in process. This multi-year research project is funded by the National Science Foundation (NSF SES # 1322161) and examines the effects of international courts on human rights and the roles that interest and advocacy organizations play in this process. The project includes a state of the art database, European Court of Human Rights Database (ECHRdb).  The database includes over 15,000 judicial decisions from the European Court of Human Rights, 1960-2014. It is the first publicly accessible database to systematically detail international court judgment data, alongside interest and advocacy organization participation, and the effects on domestic and international law. It relies on cross-national, time series legal data, collected through case law analysis, elite interviews, and archival documents. The project develops an interactive website housing the ECHRdb featuring an online analysis tool, data visualizations, and downloadable data files. Users are able to analyze international court data and advocacy group mobilization in innovative ways, informing the future of human rights protection and enforcement.
R. Cichowski & E. Chrun (2017). European Court of Human Rights Database (ECHRdb), Version 1.0 Release December 2017. 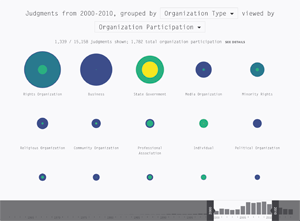 This multi-year project is funded by the National Science Foundation (SES#1748180) and is a collaborative research grant with Dan Brinks at UT Austin (SES#1748131) and Jeff Staton at Emory University (SES#1748128). It seeks to develop a new model for collaborative and convergent research communities in law and social sciences. Collaboration is across field, method and geographic expertise and the communities are convergent in that they facilitate the merging of these diverse perspectives to produce innovation and understanding around a single deep scientific question or pressing societal need in the field of comparative and international law. There are three components to the research communities: data infrastructure, idea labs and workshops and the Global Law & Politics Network. This project is supported by the National Science Foundation under Grant Number 1748180.