Descended from African American slaves, Native Americans, and white slaveowners, John Handcox was born to a family of poor Arkansas sharecroppers at one of the hardest times to be black in America. Over the first few decades of the twentieth century, he survived attempted lynchings, floods, droughts, and the ravages of the Great Depression to organize black and white farmers alike on behalf of the Southern Tenant Farmers Union. He also became one of the most beloved folk singers of the prewar labor movement, composing songs such as "Roll the Union On" and "There Is Mean Things Happening in this Land" that bridged racial divides and kept the spirits of striking workers high. Though he withdrew from the public eye for nearly forty years, missing the "folk boom" of the 1960s, he resurfaced decades later - just in time to denounce the policies of the Reagan administration in song - and his work was embraced by new generations of labor activists and folk music devotees. This fascinating and beautifully told oral history gives us

"A deeply moving account of the life and struggles of John Handcox who became known as 'the sharecropper's troubadour' for the songs he wrote and sang at union meetings in Arkansas, Mississippi, and throughout the nation. Honey's book is essential reading to understand the history of labor and black music in the rural south."

--William Ferris, author of The Storied South: Voices of Writers and Artists

"An arresting account of the exemplary life of an American genius. Honey's and Handcox's voices mix in a unique combination of oral history and scholarly research that reminds us of the centrality of music, and of poetry, to US freedom movements."

--David Roediger, coauthor of The Production of Difference 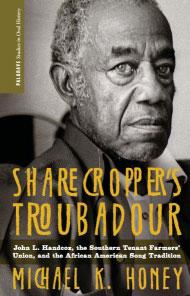