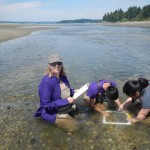 What makes for a good day of field work? Finding plenty of good data? Having nice weather? Having unexpectedly gracious hosts? Being able to sleep in? Having our day filmed by a professional photographer? Our field day at Mud Bay provided it all!

Mud Bay was only about an hour away and low tide was due to occur around 2:30pm. So there was no rush to get there early. Which meant we could sleep in a bit. A big bonus in my book! After driving to our site, we were greeted by some extremely gracious hosts, Ken and Liz. They live right at sampling site and were very willing and excited about our study and helping the ecosystem they called their backyard. We were greeted with smiling faces, excitement, water, towels, a place to rinse off, and (here it comes!) a bathroom! Yes, it really is about the simple things in life.

After we chatted with our hosts and unloaded some of our gear, we began a preliminary survey of the site. We walked around the bay and began wondering why it was called Mud Bay. There was very little mud, especially when compared to Fidalgo Bay where a few of us felt the strength of the grasping mud as it closed around our feet and legs. We also noticed that lots of oysters were present. They were much denser than we expected which meant there would be much more data to collect. 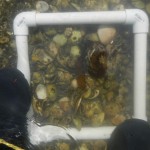 Our previous field day at Fidalgo Bay included conducting Olympia oyster population studies and we were a bit disappointed by the low numbers. So heading out again, we were hoping we wouldn’t run into the same low population issues. We considered using larger quadrats but we decided to stick it out with our 30cm (1 square foot) quadrats. It’s a good thing we did because the Olympia oyster population at Mud Bay was much higher. At Fidalgo Bay, most of the tested quadrats had very few, many times zero, oysters present. However, at Mud Bay many of the quadrats had close to 50 oysters. If we had used larger quadrats the populations would have been into the 100’s! We did notice higher populations in locations with less water flow and harder substrate. Since Fidalgo Bay is very muddy and soft, this is likely a reason for the lower oyster population.

We had constructed our own makeshift coolers because we couldn’t find any that would fit our needs. They were made of simple plastic tubs, reflective bubble wrap, and tape. We were unsure how well these coolers would actually insulate. We conducted a 45 minute test comparing 2 of our coolers, one with the lid on and one with the lid off, full of water, left in direct sunlight. Our results were exactly what we wanted to see. The cooler without the lid resulted in a 7°C increase in water temperature. The cooler with the lid resulted in no change in water temperature. Our simple cooler design was a success! This is important in performing our doping tests because the oysters need to be kept at a constant temperature for relaxation to occur. 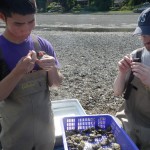 We loaded up the coolers with collected oysters, Epsom salt solution, and let them relax for 45 minutes. Then we took a count of how many were relaxed enough to open up as well as their respective shell lengths. Those that were relaxed and open were gently probed to check if they were brooding. Some of the larvae were removed from the doped mothers, which we would later analyze back in the lab. We found that a high number were relaxed and many were brooding. This meant it was the beginning of their spawning season and it’s nearly time to do more field sampling.

We had some free time to watch the sea creatures come to life as the tides came in and explore an old wrecked boat, but, sadly, our perfect day of field sampling was over and it was time to head home. We were spoiled but we can only hope that all future field days will go this smoothly.

One thought on “The Perfect Field Day at Mud Bay!”