Two high-profile Personal Rapid Transit (PRT) systems are currently under construction, and their implementation could serve as a model for how cities can better connect their existing transit systems to improve mobility.
When planners are tasked to find ways to reduce urban transportation’s contributions to global warming, they usually call for more "public transportation". Specifics are often not stated but the implication is that large investments in new light rail and bus rapid transit facilities are needed to reduce high levels of automobility. But, in too many cases, the evidence shows that heavy investments in rail and bus facilities and services have had little effect on reducing high levels of auto use. Yet, many of our existing transit systems would be better patronized if they were connected effectively with the very spatially-dispersed patterns of origins and destinations in our cities.

Currently, there are two ideas that provide some hope for serving our dispersed travel patterns better by providing such connections. One is the urban streetcar which is currently very popular in many cities. The other is Personal Rapid Transit (PRT) which is emerging now and is likely to become market-ready in the near future. Both modes provide a relatively low-cost way of providing the "connective tissue" that could lead to better transit mobility. Streetcars are the favorite mode of organizations like Reconnecting America, and their attributes are well known and easy to understand. Such systems can be constructed quickly in flat areas, using existing streets, with minimal disruption.

PRT is the favorite mode of the Advanced Transit Association and its attributes are relatively unknown but becoming much clearer. It can be used in hilly areas where streetcars cannot operate. It can also be used to bridge geographic barriers to reach inaccessible areas that are ripe for development. City officials, urban planners and their consultants should become aware of what PRT has to offer. And, evaluate how it can complement the existing multimodal transport system by connecting its various components more effectively.

Here is an update on the two PRT systems that are the most active (as of January 2008).

One is called ULTra PRT and its first application is currently being constructed at Heathrow Airport in the U.K. A tour of the system and an update on its construction can be seen in a CNN/ITN video about the Heathrow project. 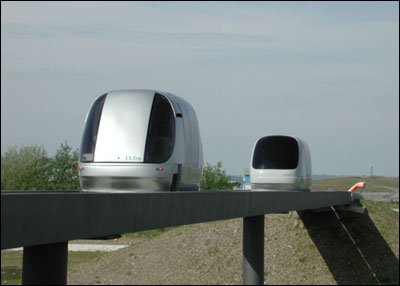 The second system is called Vectus PRT and it is currently being operated on a test track in Uppsala, Sweden. The system can be seen in operation in this video from Vectus. This test system was also the topic of much conversation at the 2007 PodCar City conference in Uppsala, Sweden. (Swedes prefer the term PodCar to PRT but they mean the same thing.) 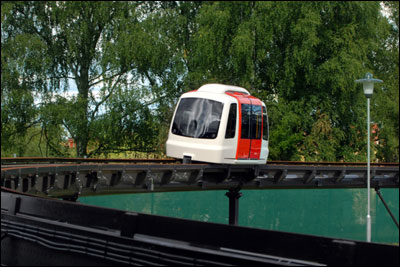 The Vectus PRT system operating on a test track in Uppsala, Sweden.

One or both of these systems may be used initially in the Masdar eco-city in Abu Dhabi that is now being planned to be the world’s first auto-free, carbon-free new town.

Among PRT’s most attractive attributes are:

PRT as a Feasible Solution

Both could be also be used effectively to extend the TOD concept beyond the traditional quarter-mile walk distance design metric, providing a considerably larger area for development/redevelopment around mass transit stations, and attracting new patrons who are now using autos exclusively and extensively.

Before it will be embraced, PRT will need to be demonstrated at a test facility in the U.S., giving everyone an opportunity to ride it and evaluate its attributes. In the meantime, urban planners should learn about it and find locations where it would enhance connectivity and circulation in congested areas. It is probable that as the intensity of interest in reducing global warming trends increases, a more intense demand for reducing current levels of automobility will also occur. Both streetcars and PRT can help make the "more public transport" response a more specific reality, on the flatlands and among the hills.

Several other PRT systems now being developed around the world are described at the Innovative Transportation Technologies website.