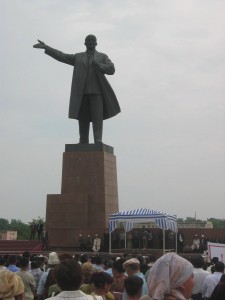 I am an Associate Professor in the Henry M. Jackson School of International Studies and Director of the Ellison Center for Russian, East European, and Central Asian Studies at the University of Washington.  I do research on the post-Soviet region, covering topics such as protests, authoritarianism, informal networks, and identity.

My book, Weapons of the Wealthy: Predatory Regimes and Elite-Led Protests in Central Asia

I am currently doing research on the political uses of conspiracy theories in the post-Soviet region. The project investigates why politicians promote conspiratorial claims and traces how these narratives diffuse across space and evolve over time. Another ongoing project investigates state-building and informal networks over two decades in Georgia. I am also interested in how attitudes and identities change in Central Asia and the Caucasus, for which I employ surveys, focus groups, and experimental methodologies.

I am a member of the Program on New Approaches to Research and Security (PONARS) in Eurasia, a member of the Advisory Council of the Kennan Institute, and a participant in the Bridging the Gap Project.